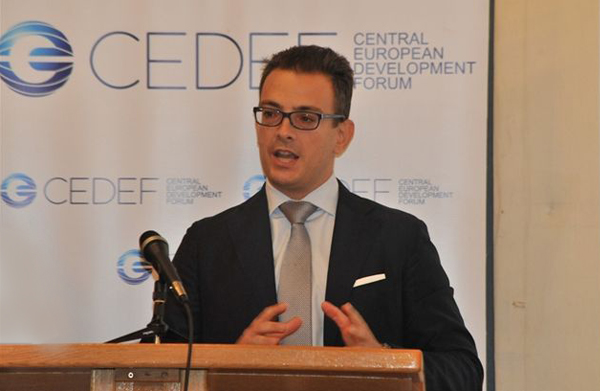 The fourth international CEDEF energy forum was opened in front of 300 participants by  Zorana Mihajlović, PhD, minister of energy, development and environmental protection of the Republic of Serbia, and Dr Željko Kovačević, minister of energy, industry and mining of the Republic of Srpska. The Forum represented an opportunity for a bilateral meeting of the ministers. Minister Mihajlović also met with the representatives of Klaser Futura, the delegation of the Polish Parliament, and representatives of the Polish Embassy and Hungarian Embassy in Serbia. The Forum gathered key players in the domain of hydropower, energy efficiency, and treatment of waste waters from numerous countries, such as: Serbia, Italy, Republic of Srpska, Slovenia, Czech Republic, Poland, Hungary, Macedonia, Belgium, Russia, Montenegro, and many others.

Our company also made a contribution to the Form and the issue being discussed, as the only insurance company in Serbia to have recognized not only the significance of this issue, but also the connection between this domain and insurance. DDOR Novi Sad was represented by Dr Maurizio Valla, assistant general director for marketing and sales. While discussing the issue, he pointed out that hydropower represents the largest source of renewable energy in the world, since it provides almost one fifth of electrical power in the world. “It is important to mention solar panels which are in for a bright future, since they do not produce harmful substances while producing electrical energy, and they are extremely efficient due to the quantity of energy which is emitted to the surface of the Earth. Investments into renewable energy sources are significant, but they certainly have their share of risk. DDOR NOVI SAD is the first insurance company in our country to have recognized the importance of such projects, and is the only insurance company which offers insurance of mini power plants, solar panels, and is in the process of developing wind farm insurance. All these systems are exposed to forces of nature, strong wind, rain, hail, fires, breakage, making insurance the key way to protect investments and income”, Valla pointed out.

Since this year’s CEDEF Forum was organized in partnership with Italy, and with the aim of emphasizing the importance of Italian investors and cooperation between our two countries, particularly aimed at taking advantage of Serbia’s water potential, Marco Leone, first secretary for economic and commerical affairs in the Italian Embassy in Serbia, addressed the meeting on behalf of the Italian ambassador, thanked CEDEF for organizing the Forum, and expressed hope that such meetings would additionally contribute to an even closer cooperation between Italy and Serbia.